No Need To Rush

I feel like I am forever saying to my children, “Hurry up!” “Quick…” “Come on” “Can you go a little bit faster, please?”
But one thing, about living here, that’s a stark contrast to me (always trying to rush everything) is the very relaxed Thai culture that surrounds us.
Yesterday morning Dave and I had the alarm set for 1am!  By 2am we had snuggled the kids into the car with their blankets and favorite soft toys and were headed for Ban Maesa village, four or so hours drive away.
Don’t you think it’s fun leaving to go somewhere in the middle of the night?  To me, it always seems to add a sense of mystery and excitement to the journey.
We were on our way to celebrate the wedding of some friends- our first time to a village wedding and, for our children, their first big trip to a village.
P Jip and P Jack, who both work at ZOE, were due to be married at 7.30am Saturday morning!!
With the odds stacked against us, me getting carsick on the winding journey and Spencer being quite unwell with a fever and ear infection; we finally arrived just after 6am and we were greeted by one of the ZOE parents who used to live in this village and still has a house there that her mother takes care of.
Seated around a fire pit (in the middle of the house) we sat warming up and sipping hot drinks.  It was hard to believe that there was a wedding beginning in less than 2 hours as the pace was very relaxed with a “chilled out” atmosphere.
It was soon announced that the wedding would not be starting till 8am, which added an extra element of “no need to rush” and made things that bit more “cruise-y”.   As we walked around the beautiful village, the word passed that the wedding would now be 8.30am … and then it changed to 9am… did anybody seem stressed?  No, not one bit! 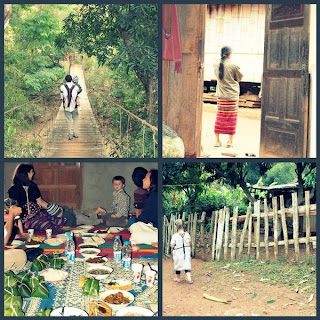 Eventually, some time after 8am, a bell could be heard ringing and a friend explained, “Gin khaow”.  We know those words well, time to eat!!!
We made our way to P Jip’s house and were ushered into the living room.  Sitting on the floor around a generous serving of rice, curries, vegetables and soup we ate and enjoyed the company of those around us.  Actually, I should explain, that those around us were mainly just the few other foreigners who had come to the wedding- our friends, the Tang family and Mike (co-founder of ZOE who was the one performing the marriage ceremony).  What was amusing though was that the villagers (who were eating outside) kept looking in on us through the doors as we ate and bringing in more and more food.  Our children, the only ‘white’ children present in the whole village, drew a lot of stares!!
I even had little children looking at me during the wedding ceremony and pointing to my eyes with amazement- I guess blue eyes aren’t seen around these parts very often either!! 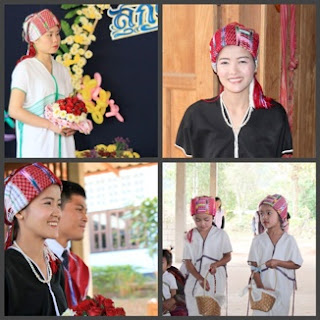 From P Jip’s house we walked up a steep road that led to the village church.  I had to keep reminding myself that I was going to a wedding.  No one was stressed, no one was rushing and I was beginning to understand how this uncomplicated, relaxed way of life could actually … be … {uh} … better! 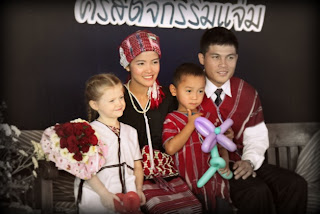 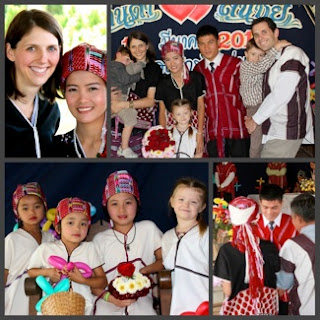 My brother-in-law asked a local person the other day, was it rude to walk around eating?  The man looked confused asking why would anyone need to?  Sometimes in our western culture we get busy and eat on the run- breakfast in the car on the way to work, lunch on the way to the next meeting… some how we have lost sense of the value of just sitting and being… enjoying the food, the company… actually sharing meals together and not eating in a rush just because we’re hungry. 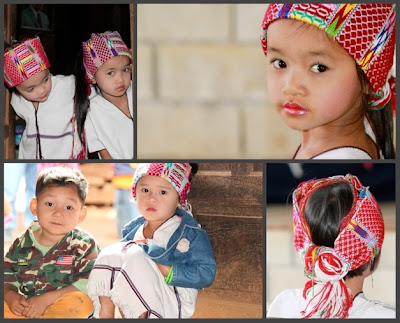 So my challenge from all of this is to: Sit and eat.  Enjoy life.  Allow enough time just to “be” and try not to overcomplicate things.
In Thai they say, “May pen ray”.  It means, no worries!
Have a great week,
Andie
Posted by Cross Family at 2:38 PM