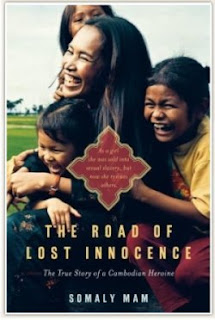 I was reading an article the other day which reminded me, again, of why we are here.
It was describing a recent raid on a massage parlor in Chantaburi province, here in Thailand where 67 Burmese women and girls (37 of them were under 18) were rescued after a tip-off from Somaly Mam Foundation’s partner in Vietnam and the Department of Special Investigation (DSI). The women's rights organisation reported that the girls had been coerced into working as prostitutes. An investigation discovered that the women had been lured into the sex trade by a trafficker.  They all faced debt bondage and were never let out of the parlor.

Unfortunately this story is too common and even worse are the cases of the children and women that have not yet been freed.
If you haven't read The Road of Lost Innocence, I encourage you to do so as well as buy a copy for a friend for Christmas.  Her life story is truly inspirational.
From her website, Somaly Mam Foundation: Somaly was forced to work in a brothel along with other children, she was brutally tortured and raped on a daily basis. One night, she was made to watch as her best friend was viciously murdered. Fearing she would meet that same fate, Somaly heroically escaped her captors and set about building a new life for herself. She vowed never to forget those left behind and has since dedicated her life to saving victims and empowering survivors.
Just like Somaly Mam, our team at the ZOE Children's Homes is committed to caring for orphans, or victims of other heinous crimes and abuse, as well as rescuing children who are at-risk of being sold into slavery or have already been sold.
ZOE exists to combat the trafficking of children globally, especially in the sex trade, and provide shelters as well as loving homes to these orphans and children who have been abused or who are at-risk of any crime against them so that they can have life again.
Throughout this busy Christmas season, spare a thought for the little children who need fighting for and are waiting to be rescued.
You have the potential to share what ZOE is doing with an audience that we cannot reach- your friends, family, work colleagues, sports team, mother's group, church, school and neighbourhood.
You can create awareness about the atrocities of human trafficking, child trafficking and modern day slavery.
You can address these issues through your Facebook page, your blog, your local newspapers or any other link you have to mass media.
If you've been moved {at all} by the work going on to fight human trafficking and care for children. If you've seen, read, heard or experienced something that has affected you, then please share your experience with others.
It's as good a time as any.  Click on the link below {under the three little photos} and raise awareness about this important issue TODAY.
Thank you,
Andie.
Posted by Cross Family at 3:23 PM