We had such a fun day yesterday.  Our family left home at 7am and headed out to ZOE Children’s Home for a photo shoot.  Photographer? .... Me! Ha ha. I know, pretty funny, and I mainly only agreed because Carol said I could use the cool SLR camera.
The aim was to get head shots of all 50 ZOE children.  And we had just one hour to do it!
Everybody in our family had a job: Dave was to help getting the kids to stand in the right spot and making sure their hair was neat etc.  He knows them all a lot better than I do so he was great at being able to elicit lots of smiles, which made my job easier.
Spencer took it upon himself to help out in a ‘pastoral care’ type role, running in front of the camera and wanting to hug the kids.  Very funny.
Tobi and Eliana went around handing out lollipops to the children and playing with them while they waited until it was their turn.
Me... I had to try to control my laughter and keep the camera still at the antics going on around me.  It was a funny morning and one I’ll remember for a long time.
Here’s a few of the shots that won’t be being used!!! 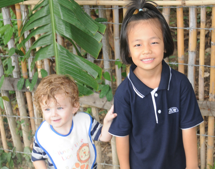 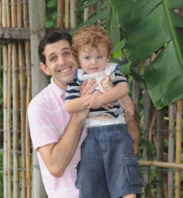 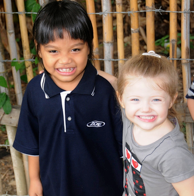