Reflections- from the couch. 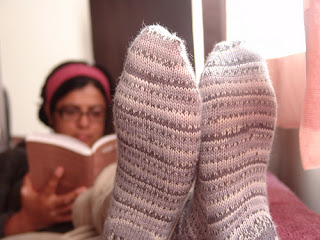 So I thought that I’d spend a bit of time reflecting on our time here in Thailand as well as sharing some tidbits of information. I’ll also give you a bit more of an individual update on how the children are coping and hopefully answer some of the questions that people having been asking us in their emails that we haven’t been able to respond to as yet. 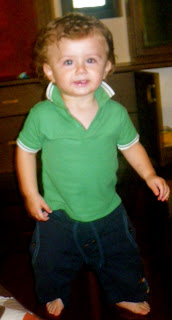 Firstly little Spencer… it seems he is having a few more settled moments now. I have no doubt that once all the children’s toys arrive (we’ve been told February 4th) and I am able to set up some activities to occupy him, things will improve dramatically.  He is as cheeky as ever and is often his happiest when the Thai people are giving him high 5’s and paying him lots of attention. He is learning to negotiate the different levels in the house and has made shutting the gate to the kitchen his ‘official’ job!
In July when Spencer stayed with my sister for the week (while we came to Thailand) he adopted the nickname ‘Spencer-roony’.  That has taken on some variations now to become ‘Roo-man’ or ‘Roosy’ but the latest nickname, and one that will probably be easiest for the Thai people to pronounce, is simply ‘Roo’.
Spencer has been so phenomenal with the food here. He is willing to eat anything but is most satisfied when Dave is feeding him rice with chopsticks.
I think he has doubled in size since we arrived here and it’s no wonder when you see the quantity of food he’s been consuming.  Spencer is constantly chattering but we don’t often understand what he’s saying.  I’m sure it’s just that it’s all in Thai!!!
I was a bit concerned the other day when I saw some huge welts on Spencer’s body. After asking Michelle what she thought they were, her and Joyce stepped in and organised getting some special cream from the chemist for him. After the swelling went down, they were obviously just some kind of bite but he must’ve had a reaction around the bite area.  I’ve been applying the cream for a few days now and they seem to be looking much better. 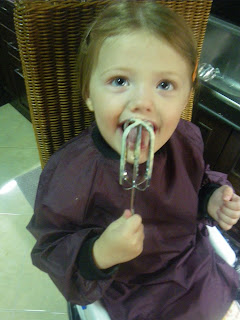 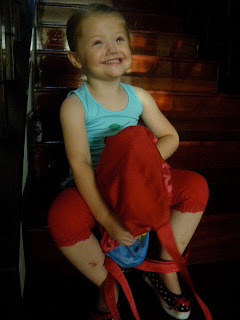 Eliana is really enjoying her time here. She is treated like a little princess wherever she goes which she is becoming accustomed to and somewhat lapping up!
People are forever giving her little trinkets, juice, food etc that she gladly receives with her Thai Wai (the bow).  Eli has probably struggled the most in the area of sleep.  She has seemed quite insecure at night times and is often found snuggling in with Dave and I in the early hours of the morning.  We had been letting her find comfort with us until last night when I made a little bed next to ours on a couch and she slept there right beside us. It seemed to work well and I think we all slept a little better with that configuration!  (Tobi and Spencer are sharing a bedroom and that’s been working out well for them).
Eliana is enjoying kindergarten. She has had a couple of tears leaving us recently but once she gets involved, she really loves it.  Her teacher Miss Cheryl is so kind to her and is very generous.  She told us that Eli did a great job with her ‘Show and Tell’ yesterday where she took in her bathers, goggles and cap to talk about swimming (the class is doing a theme on water at the moment).  Eli loves talking so much that this did not surprise us.  She already has her eye on the microphone at ZOE and was asking when it will be her turn to be up the front and speak!
We are looking forward to the children’s sports day next Wednesday. Parents are invited to attend and there’s also adult races etc.  It will be nice to meet some more people and encourage the children in their events.  There’s also an International Day coming up one Saturday in February. I’ve been asked to help out on the Australia stall! I am making and selling Anzac biscuits LOL.
Tobi and Eli keep asking us when they are able to swim at kindergarten.  There’s a pool right in the middle of the playground but it’s only used during their sport class in summer.  The teachers tell us it’s too cold to swim at the moment… try explaining THAT to our kids!!
Tobi and Eli attend kinder every day but come home after lunch.  This works really well.  We drop them off at 8.30 and then pick them up at 12.30pm.  We then walk home and they take a rest and we spend the late afternoon either chilling out or going somewhere.  The classes they take include Sport twice a week, Music twice a week, Library and Thai.
Tobiah is doing really well.  He has probably coped the best out of the three children.  He loves his kindergarten, going to ZOE and has amazed us by trying some new foods with a pleasant attitude.  We still need to work on this area, but at least he is trying unfamiliar things. He has taken a lot in his stride and is maturing every day.  Still boisterous, he gets a bit restless sometimes when confined to the house for too long but thankfully we have a small “park” (really just a swing set) opposite our house that Dave takes the kids over to play at and burn up some energy. 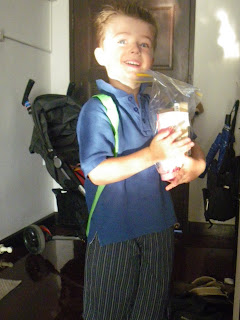 Tobi’s class studies Thai every day and his American teacher also speaks Thai fluently.  Tobi is not one for being up front about what he’s learning at school but I have noticed his Thai counting has really improved.  He was counting well into the twenties the other day… more than I can do yet!!
I went to an information afternoon for Tobi’s class on Tuesday, which was an introduction to a new homework activity that his teacher wants to trial. It involves using i-pods with prerecorded instructions to listen and respond to.  It allows the children about 20 minutes extra, 3 nights a week to practice their phonetic awareness and focus on identifying various sounds in words etc.  We had a turn to experience what the students will be doing and I was impressed.
Tobi also has ‘Show and Tell’ in his classroom.  His theme this term is Transportation and the letter for the week was ‘P’ so he was able to take in a wonderful book our beautiful friends the Hughes Family gave us when we left which is all about “planes” and the airport.
Now the food here has been great!  This was something we were really looking forward to.  It’s true that it is cheaper to eat out than cook yourself.  We have this little take away place down the street- you couldn’t call it a restaurant.  It’s very “side-of-the-road”, but really good.  We often buy our sticky rice or chicken and rice there for 30 baht a serve ($1).  There’s also a lady that makes the most delicious choc-banana roti for 30 baht a serve too.  Yum!
If we go to the food court at our local shops, we can all eat for under 100 baht (about $3.50).  The only difficulty is the food is very different to what the children are familiar with so, to date there is not a great deal consumed...but they will get better!
We’re still working all this out though.  Last night we ate at home and I made chicken, salad wraps and then we ate fresh fruit afterwards (we even tried dragon fruit for the first time).  This was a healthy meal and the kids ate so much,  as they recognised everything! It is more expensive to eat this way.  We aim to find a balance between eating in and out that works for us.
Dave and I have enjoyed having Jess stay with us.  We have had many late night chats and midnights snacks, which has been fun.
I am enjoying my baking supplies very much.  I made some more scones (yes with SR flour this time) and Eliana and I made cupcakes together the other night while Tobi and Dave went out to ZOE.  It’s funny though, the flour and butter etc all taste slightly different which makes everything just that little bit “not-quite-the-same”. 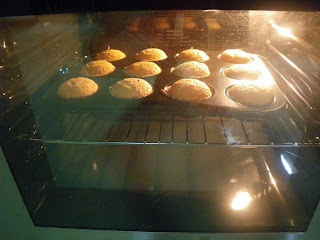 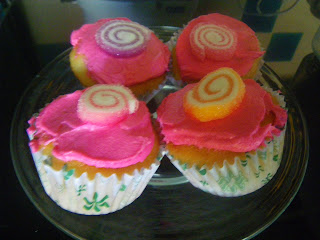 It’s been really great living in this house so close to the children’s kindergarten and the other missionaries while we haven’t had a car.  We will plan on moving to a less expensive area once our lease runs out though. By then we’ll know our way around more and be able to drive the kid’s to school etc.  We think we can find somewhere for half what we are currently paying.
Now, I am writing way too much so just quickly to answer some questions. Yes, my sinus infection cleared up after antibiotics thank you. I am feeling much better.  A few nights of rain last week also helped to clear the air a bit too I think.
The latest on the shipment of our belongings is that it will arrive next Thursday but we’re waiting and hoping that it won’t be longer than this.
We stand amazed at how friendly and welcoming every one has been.  The people of Chiang Mai are so lovely and sweet and our smaller community of ZOE friends just continue to go out of their way to accommodate our needs. It’s very humbling.  The teachers at APIS where the children go to kinder are also very kind and genuine.  We feel truly blessed.
I hope this entry gives a bit more of an insight in to how we’re doing and what’s been happening.
Take care,
Andie.
Posted by Cross Family at 12:52 PM