Greater Things Are Yet to Come 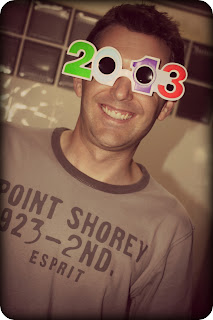 Are you getting excited about the fast approaching New Year?
Well I am.  {And Dave certainly looks like he is from this picture haha}
2012 has been so great but I am looking forward to seeing God do even bigger and better things both in our family and at ZOE in 2013.
With the New Year getting closer minute by minute, I thought it'd be nice to reflect back on the year just past, and so, that's exactly what we did as a family at dinner tonight.
We brainstormed all of the highlights from 2012 and then (through a very lengthy and complicated voting process) we narrowed it down to our Top 12.
There was such a lot of good stuff that didn't make it to the final 12 too, but ... here it is... our Top 12 of 2012!!

For the older generation, who might find that text a bit on the small side, the list says:
1. Having overseas visitors.
2. Our family holiday to Koh Chang
3. Going to Sticky Falls (lime stone waterfalls)
4. Moving house.
5. Playing soccer in the street.
6. Tobi winning the 200m at school.
7. Going to ZOE.
8. Christmas time.
9. Reading chapter books as a family.
10. Eliana's pony party.
11. Going back to Australia.
12. Friday's chapel at school.

There has truly been so much to be thankful for this year (more than I could mention here in one post).
From financial donations (at crucial times when they were needed) to seeing God's protection over our family as well as all the amazing things that have occurred at ZOE where children have been rescued and their lives transformed.
I get goosebumps thinking about how in 2013, there are greater things still to come.
I am excited that we are positioned in the city in a Thai community where we are building relationships with our neighbours.
I love it that there is a growing interest in ZOE's work within Victoria and Australia and an awareness about child trafficking that is prompting people to rise up and take action.
I get teary when I see my children settled in their schools, growing and learning and keen to make a difference in the world despite their ages.
And I feel such a deep sense of gratitude when I look around and realize that now, after 3 years of being here, I actually have some really good friends.  Not just acquaintances, not just other school mums, but lovely, genuine, friends.  I really do feel so blessed.

For those of you who may not know the story behind the song
“God Of This City”; it was written by a band called Bluetree during a missions trip to Thailand.  While the band was on stage performing worship songs in the Climax Bar, a club which doubles as a brothel in the Red Light district of Pattaya, God put these powerful lyrics on their lips in that moment…"greater things have yet to come and greater things are still to be done in this city."  Right in the middle of their set of songs, this song was spontaneously birthed. The song then became a message of hope for the people of Pattaya and is now being sung in churches across the world.

In all honesty, there were several of my 2012 goals that weren't completely finished.  Actually, some I didn't even get close to achieving.  But with only a day and a few hours left to go, I'm putting those things behind me and choosing to look forward.
There is still so much to be done that I am heading into the New Year full of anticipation and expectation that greater things are ahead.

How are you feeling about 2013?  Setting any NY resolutions this year?  Expecting greater things in your family/ community/ work place/ business/ life?
Posted by Cross Family at 8:37 PM

Awesome!! I have just finished my Dec 31 morning devotional reading which focused on "hitherto". This 'old' word has clear implications of 'up-to-this-point' but just as importantly 'from-this-point-on'. Slim Dusty (Aussie country singer/legend) sang towards the end of his life "Looking forward, Looking back".
Thanks Andrea for your reflections and projections! (Love Dad)

Great post Andrea! I also love that song, and hearing the history of it makes it even more special. Thank you for sharing it, guess which song will be on my playlist in the coming week or so?... ;-) May God bless you and the rest of the Crossies this coming year 2013! See you soon...
With love, Jennifer