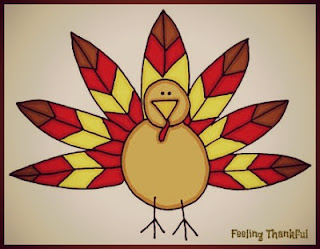 I love it how different each of my children are.
You need only ask the question, whilst casually driving in the car, "What are 5 things your grateful for today?" to see how glaringly obvious it really is.
Spencer's answers would be something like this, "I am grateful for cuddles, kisses, wrestling, tickles..." {and anything else that involves physical contact}.
Eliana's would be, "I am grateful for nature, creation, snails, the trees, flowers..." and Tobi's (and this will come as no surprise to those of you who know our Tobi) goes something like this, "I am grateful for pizza, nachos, hot dogs, noodles, ice-cream...." and "...by the way, what's for dinner?"

I had a chuckle last night when Spencer showed me his Thanksgiving craft at the ZOE missionary Thanksgiving dinner.
I looked down and read the leaves where someone else had scribed what he was grateful for, "Mum and Dad, brother, sister and squid!" 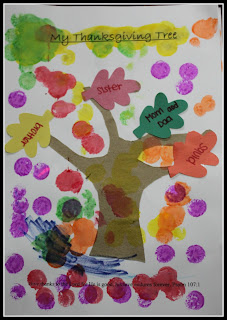 Spencer so often cracks me up.
He is going through a stage of being really interested in tasting foods deemed as exotic or strange in some way.  I think it all started on our family holiday back in June when he ate a fish eye and LOVED it.  Since then he was asking about having a date-night and eating squid.
He recently had this dream fulfilled and cooked squid at home with Dave and thoroughly enjoyed the whole process (hence it making it to the Thankfulness Tree).
So what's next on his list you may be wondering?
Well, yesterday he was eagerly discussing with us all how on his next date, he wants to eat bugs! Ewww!  At least we live in a country where bugs are a "treat" and readily available LOL!

When it comes to being grateful, we're all different aren't we?  And all our varying life experiences influence what we do or don't feel thankful for.
I know back in Australia if I were to fill up a sink with hot soapy water to wash the dishes (which wasn't often as I had a dishwasher) I would totally take having hot water for granted- it NEVER crossed my mind to give it a second thought.  But, after 2 and half years of not having a dishwater OR hot water in my kitchen, when we moved house a few months ago and our landlord offered to put a water heater in the kitchen, I was seriously almost in tears (with gratitude).
Now, every time I turn on that tap and hot water comes out and I don't have to go and boil the kettle before washing the dishes, I remember and I feel so thankful... EVERY time!

This is the first house I have ever lived in without an oven.  When we first moved here, this took a bit of getting used to.  Suddenly I could not think of one single thing to make for dinner without an oven.  "What had I done?" I asked myself.
It didn't take long though to realize that there was heaps of things I could still cook and I moved on with life!
Well, I thought I had moved on until I had to make something for Tobi's school bake sale and the ZOE Thanksgiving dinner both within a week.
The bake-sale thing wasn't too bad, I managed to remember some non-bake recipes and made some chocolate rum balls (minus the rum) and some chocolate spiders which went well and were apparently all sold out by the time Tobi got there.
So that issue was okay BUT Thanksgiving was a whole different level.
I found myself madly emailing my American friends for ideas and "googling" Thanksgiving recipes like there was no tomorrow.
All that I could think about was that amazing cinnamon roll pumpkin vanilla sheet cake and yummy pumpkin bread that I'd made last year... in an oven!
I eventually had to pull myself up on my discouraged and panicky state.  Here I was trying to prepare for THANKSgiving and I'd completely lost my perspective.  There are millions of people in the world who don't have ovens.  This was not a major issue.

And now, the night after, as I reflect back on just what a wonderful time it was, I begin to wonder.
I wonder how many other times I've almost robbed myself of joy due to focusing on "I can't" and not on the "I can".
How often I wish I spoke better Thai.  But instead of fixating on what I don't know and getting down on myself, I should just be grateful that I can sit with my Thai tutor for a two-hour block and communicate. Yes, I might be slow.  Yes I might stumble and make mistakes and have to ask her to repeat herself numerous times but I have made progress over the past few years and, for that, I am thankful.

I am beginning to s l o w l y understand that whilst it is easier to find an excuse as to why I can't, I should make it a priority to find a way to turn it into an I can!

So this Thanksgiving season and heading into Christmas, I want to put away the, "... but I'm too old, too young, not skilled at..., don't have..., don't know..." that stops me from being thankful for all the things I do have and using them!

Be thankful for what you have; you'll end up having more.


If you concentrate on what you don't have,


you will never, ever have enough.


Is it just me? Leave a comment below. We love hearing from you!