Have you ever felt like you're being pelted with fiery darts?

On Friday night, Dave finished Part 1 of a two part series on the Armor of God with the ZOE youth.
Dave has been teaching about the illustration Paul gives in Philippians as he compares the armor of a Roman soldier to the tools God has given us to equip us for the struggles (or battles) in life.

I found it amusing that less than 24 hours later, he was literally being pelted by balls being thrown at him; having to fend them off, whilst trying to frantically attack the "enemy" (teenagers) on the other teams.

On Saturday, Dave was an eager participant in a dodgebrawl (dodgeball) tournament.

The kids and I tagged along to be the ZOE Zealots cheer squad but as we watched on supportively, we were all secretly thankful that it wasn't one of us out there in the game.
At the end of Round 1 {quote} "that was the longest 15 minutes of my entire life" and something else about "when would the torture end?"... the ZOE Zealots weren't looking quite so zealous and needed a strong pep talk to face Round 2!!
There's no need to go into the disappointing results of Round 2 and 3, needless to say, there were some very sore muscles and aching bodies after the brutal attack of the stronger, younger, fitter, more athletic teenagers than the {not so much} ZOE team LOL.
You know it must have been bad because even Dave, who loves any opportunity for a sporting event or game, could be seen grimacing and muttering, "I'm just not as young as I thought I was!"
But despite the day not ending in a victory, the ZOE Zealots were heroic to us!  Well done team, you did us proud! 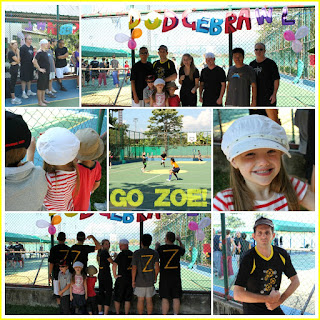 I pray this week that if the fiery darts of temptation, lust, greed, disappointment, discouragement or jealousy are launched in an attack at you, that you can clearly see them coming and set about raising your shield in defense.

I pray that these darts, sent to attack your faith, your mind or your emotions, will immediately be extinguished by your faith in God.

Ephesians 6:16: “Above all, taking the shield of faith with which you will be able to quench all the fiery darts of the wicked one.”

Oh, I almost forgot, a BIG welcome goes out to our new ZOE missionary volunteers, Jonathan and Amanda Degler.
It was great to have you on the ZOE Zealots team, but it's even better to have you on the ZOE Children's Home team!
We're looking forward to getting to know you more over the coming years.
Posted by Cross Family at 10:09 PM