Hey, it’s Dave here!
I feel like it’s been so long since I blogged, that I could almost qualify as a guest blogger!
Well, I wanted to share with you one of my December highlights.
Now I know that you probably just checked your calendar and saw that it is now February 2011!! Okay, so I am a little bit behind in a few areas but I did not want to miss this opportunity.
In December the children at the ZOE Children’s Home were very blessed to receive new shoes!  And everyone loved them!  We’re talking bright AND colourful and because they’re slip-ons, they are the perfect shoes for Thailand.
What’s even more amazing is that Life Outreach International, who’s donors raised the money for these shoes, didn’t only just provide for the children at the ZOE Children’s Home but enough to bless hundreds of other children throughout Chiangmai.
I was involved in this exciting project, helping to deliver shoes to children outside of ZOE and seeing their smiles as they received this great gift.
In the schools that I have visited outside of ZOE, all children were required to wear school uniform.  At a glance, you could be forgiven for overlooking a child in uniform and thinking that they must be “okay”.
It only took me moments though, as I helped to distribute shoes, to realize that, in fact, many of these children were actually in high need.  Uniforms were discolored from several days of wear, and the majority of children also had gaping holes in their socks.  Some of the kids appeared to have sores on their feet too, so I could see that this gift was of high value to them.
One of the other wonderful parts to passing out shoes was that in the afternoon, some of the ZOE children, who had finished their school day early, offered to come and help.
Without saying too much about the backgrounds of our ZOE kids, one of the girls who came with us that afternoon used to have to beg on the streets for money.  For a child that is involved in a ‘begging ring’ they are required to get their nightly quota of cash to avoid mistreatment or unthinkable punishments.
We know from our work here that 9 out of 10 children that beg on the streets of Thailand will end up working in a brothel, so I can say with some surety that her opportunities in life were, at that point, pretty limited.
She sure had it tough before she came to ZOE.
But, as I observed her from a distance, she busily began to organize her peers and make sure that every shoe size was displayed in its correct position, ready to match to the children who were about to arrive and receive their precious gift.
As she slowly knelt to the ground, a position that I am sure she had been in many times, I watched a she gently placed a new pair of shoes on to one of the other little girl’s feet with large holes in her socks.
At that split second, that tender moment, I saw the transformation of a life.
A child that used to be begging, now so joyously and willingly involved in giving, by handing out shoes, to the poor children around her.
I share with you just one, of the many transformed lives of the children at ZOE.    Every child has their own story and we are so glad to be involved in helping these kids to become all that they were created to be.
We exist as an organization to make a difference in children’s lives.
The way I felt that day when I saw the smiles on the children’s faces- from the ZOE kids that helped pass out the shoes, to the children receiving them, this will be imprinted in my mind for a long time to come.
As the day wore on, Andrea and Tobi met me back at ZOE to refill the trucks and head back out again, this time to a small village and children’s home. 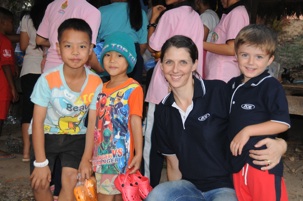 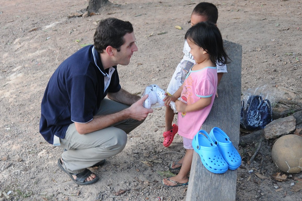 I am not sure yet if Tobi comprehended the work that he was involved with on that special day.  I don’t know if he understands the significance of giving shoes away to children that have so very little, but I hope and pray that his heart expands with love and compassion for other people and that he will grow up to be a man that loves to help and change the lives of those in need.
I have made a short clip that shows some of the photos from the day.
Note: I have removed the photo of the ZOE child who I made mention of in this article, to ensure we protect her identity.
The child mentioned in the story above is not shown in any photographs.
Posted by Cross Family at 10:29 PM