A large crowd of people streaming in to our street on Tuesday at 4pm
had us all very curious.
It was the beginning of a huge soccer tournament between Grace International School (where Tobi goes) and some of the other Chiangmai international schools, along with a team from the Philippines and Taiwan. It was the start of a 5 days event, which ended last night with an exciting 3-1 win to Grace!!

When we weren’t over watching the action, our children loved climbing our front gate and yelling hello to the many familiar faces walking by. The event drew out crowds from everywhere and the atmosphere was electric!
Our street has been so congested with cars, buses and pedestrians and finding a car park has been difficult for spectators at times. One of the days, I went to pull out of our driveway and noticed a car parked right across the end and totally blocking my exit. Thankfully by the time I had started my engine and opened the gate, the owner ran over very apologetically and found somewhere else to park, but I was getting worried for a moment there!
Last night as Dave, Tobi and Eli walked across with their dinner to watch the grand final, some international students stopped Dave and the kids as they came out of our house and wanted to take their photos. Eli was most willing and obliging to smile politely for a few photos, however Tobi, who dislikes that type of attention, was much more keen to just make it across the street uninterrupted and meet up with his friends. And fair enough too!!
When Spencer and I arrived later, Dave was the only one out of the three of them still actually watching the match as Tobi and Eli had hooked up with all the other children from the neighborhood and were happily playing their own games. It was so nice to see them running and playing so freely. It really was a wonderful atmosphere.
I guess the real highlight of the tournament though was the ice-cream cart that was parked right on the edge of our driveway for four days in a row!! How cool is that? Talk about easy access. Every child’s dream! 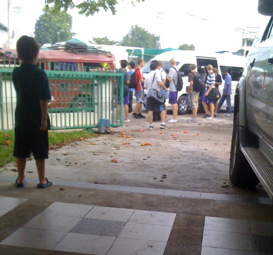 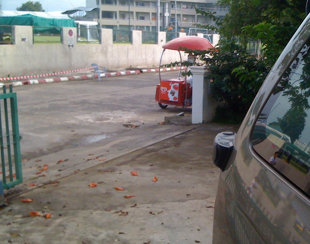 Photos: The ice cream cart... and waiting for the crowds of people to arrive.
Now, speaking of parked cars, parking etiquette in Thailand is very different than in Australia and the act of “double parking” if the car park is full, is not frowned upon at all. It is extremely common for cars to park right behind you and block you in simply leave their car in neutral for you to push it to the side if you get back and their car is still in the way!! You may remember this happened to me once when I was with friends after a women’s conference but the people forgot to leave their car in neutral… we ended up having to ask the security guards of the hotel to move the car which was a time consuming ordeal as you can imagine! 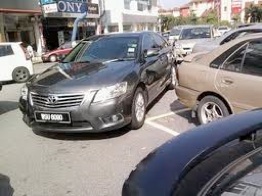 Well on Thursday night I headed out to do some grocery shopping and discovered a very full car park. There was a carnival in full swing on the land next to the shopping centre and it was unbelievably busy. Surprisingly I found a car park relatively quickly but upon returning to my car, a little over an hour later, there was another car double-parked right behind me!! Long story but, yes, I am proud to say that I actually PUSHED my first car out of the way!! So glad the owner had left it in neutral!!

So anyway, while I am on the topic of vehicles, I also wanted to share some photos I’ve taken recently on my phone through the car window of “heavy loads”. This is one thing that fascinates me about Thailand, the variety of over- burdened cars, motorbikes, trucks and utes. I wish I’d taken more photos- I’ve seen some doozies! 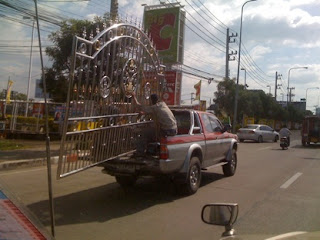 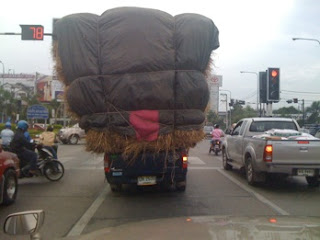 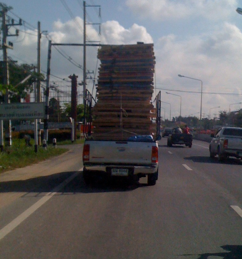 Anyway there is a point! You probably know I have been feeling a little homesick, a little far away and, yes, a little sad at times over the past few weeks but whenever I see one of these heavy-loaded vehicles (I’m not sure why but…) I am always reminded of that verse from Matthew 11:28 "Come to me, all you who are weary and burdened, and I will give you rest”.

So I am thankful that there are a lot of these heavily burdened vehicles on the road in Thailand because I am being constantly reminded of this promise!!


“Cast your cares on the LORD and he will sustain you; he will never let the righteous fall”. Psalm 55:22