An Ordinary Week... well sort of! 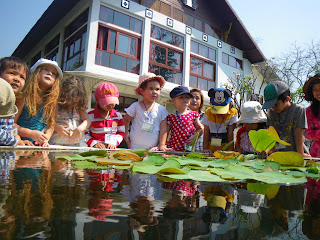 I trust you all enjoyed a nice, long weekend back in Australia and that wherever you were, you didn’t get too wet.  We’re hearing that things were getting pretty stormy in some parts for a while.  Our thoughts are with you.
Last Monday we had a public holiday here so we used the opportunity to escape the increasing heat and take the children to a local pool.  Strangely this was my first ‘swim’ since arriving in Thailand and despite the weather being high 30’s, the water was FREEZING!  It didn’t stop the children though, or Dave, and they totally enjoyed splashing around and keeping cool- at least for a couple of hours anyway!
David has begun to count down the days until he starts at ZOE.  This is his last week to acclimatise before he begins his official duties at the children’s home.
So has he acclimatised?  Well time will tell.  We both feel differently about this on a day-by-day basis.  The minute we begin to feel that we’ve got our heads around our move, we realise that ‘no’ actually we haven’t and there is still so much to organise, get done and learn.  What a steep hill we’ve been climbing.  There are certainly days when ‘life’ over here feels extremely overwhelming.  The most simple tasks that we’ve performed millions of times back home can be so difficult, confusing and frustrating here.  We try to keep our heads held high though and laugh often… otherwise we’d probably be crying way too much!
Today I picked up the phone to hear the lady from the front office of our gated housing estate telling me that because we didn’t pay our electricity bill, our power was being cut off “Right now!!”  I quickly grabbed Dave- we hadn’t even seen the bill let alone avoided paying it.  Dave ran outside to be greeted by a man from the electricity company poised and ready to disconnect our electricity at the main switch. 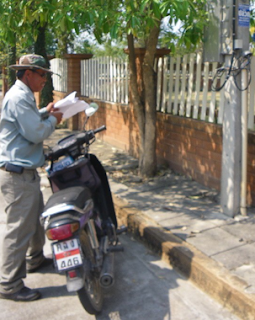 Eventually with his limited Thai, Dave managed to persuade the man not to turn it off.  The man then rang his supervisor (who spoke a little English) and Dave was able to speak to her and negotiate to leave it on and pay the man right then and there!  So as Dave ran back inside, we scrambled around and came up with sufficient money to keep the power on.  Of course he had no official identification or receipt book so we just hope someone doesn’t come again tomorrow and cut it off when we are out!
This situation was quite stressful and one that we really felt God’s favour because about five minutes prior to the phone ringing, Dave and Tobi were getting ready to leave for the shops when something happened that delayed their departure.  David had his keys in his hand and was putting on his shoes when the call came through.
Had they gone when intended, I would’ve had the same scenario yet not enough money in my purse to pay the bill, which would’ve resulted in no electricity for us… no fans, no microwave, lights, fridge … let alone coffee machine LOL.  We cannot imagine how bad this could’ve been (especially in 40 degree heat) and, as we know with from our home phone where a similar thing happened, it has taken 6 weeks to reconnect!!!! Praise God this was not the case.  The posties seem to just leave things anywhere around here and we’ve often found bills sitting on top of the gate, in the garden etc so no wonder we never saw the bill to begin with.  We felt a little stressed about this!
On a more positive note, Eliana enjoyed her first excursion last week. Her class went off to the main campus of American Pacific School where the senior students attend to look at some pond life and do a little fishing.  She’s really enjoyed studying water this term and loves thinking of ‘water-related’ items to take in for Show and Tell on Thursdays.  When I picked her up today she was completing a sequencing activity and drawing a picture related to her field trip. 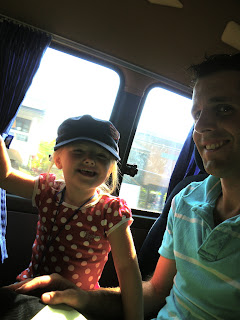 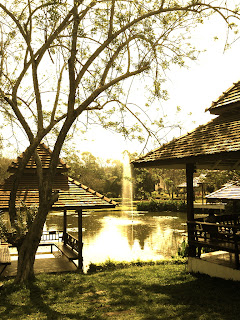 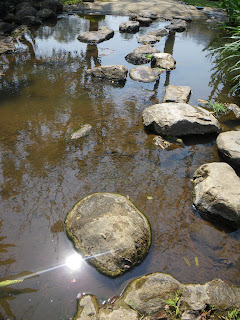 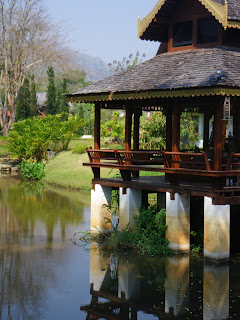 Tobi’s class is going on another excursion to the airport this week. This time to the inside of the airport though to learn about airport security.  He’s very excited about this, as he loved his last trip out.  Last week his class finished making their rocket launchers and had a great time firing them off.  Tobi’s landed in the house next to the school!
Spencer has picked up so much speed now and runs everywhere!  He seems to understand much more each day and loves going to drop off/pick up Tobi and Eli at kindergarten.  Whenever music is played he dances and sings. He gets so excited when I pull out the tub of plastic musical instruments shouting “Wow, wow”.
He continues to delight us as the youngest member in our family and is very affectionate with his big smoochy kisses and long cuddles followed by a pat on the back.
We actually have suspicions that the bites he kept getting may’ve in fact been hives caused by a reaction to eating mandarins.  We’re yet to test this out again but since we stopped giving him a mandarin after his dinner each night he hasn’t had any spots and has been sleeping heaps better.
Dave and I officially started Thai lessons last week.  I say officially because Dave actually began learning Thai before we left Australia via podcasts.  He has continued this diligently since we arrived as well as surrounding himself with Thai cd’s or language DVDs.  He also has the navigator in the car programmed to give him directions in Thai!  His vocabulary is much more developed than mine however what we are learning with our teacher is to read and write Thai so I am working hard to try to keep up with him.
We celebrated Dave’s birthday on Saturday. It was our first birthday celebration in Thailand and after searching for 5 days in a row for balloons (and doing lots of charades) I finally found some in one shop in the section with all the inflatable swimming devices… of course!  We had a pizza party and enjoyed making our own pizzas as well as keeping the theme for the decorations and the rest of the party.  It was great to have our lovely friend Jess home too.  She’s been in the States for the past month and we missed her dearly.  She is now house sitting next door so she joined us for the party, which was great. 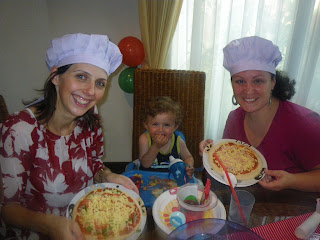 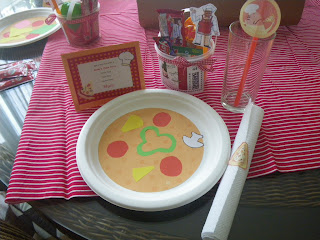 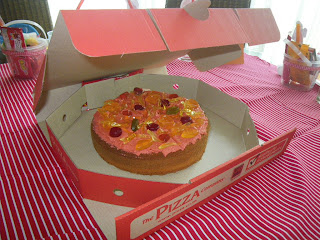 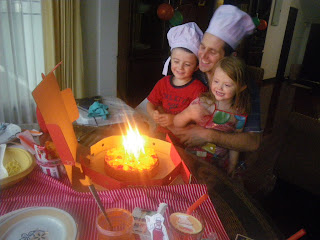 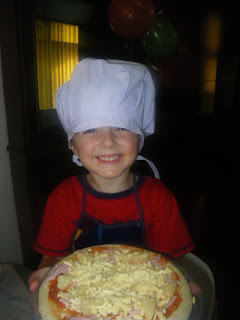 Well I am sorry for the lack of blogging during the past week.  The days just slipped away and my thoughts were all a bit scatty especially after finishing Thai lessons late at night.
Thank you so much for your emails and letters.  Dave was thrilled to receive some birthday cards in the mail and it’s always wonderful to hear news from home, even if it seems mundane to you- we love it.
Lots of people have been asking how the kids are going and whilst they have coped remarkably in so many ways, there are still so many new situations where it’s a huge struggle.  I think they all display their insecurities in different ways according to their personalities and ages.  While one of them seems to cope easily with something, another one or two will struggle and vice versa.  Tobi had a particularly stressful weekend as we continued looking for a church to attend as well as spent the afternoon/evening at a bustling market.  Spencer and Eli on the other hand found both these events enjoyable.  We can never underestimate the amount of change that have occurred for these little ones in the past 4-6 months.
We just continue to try to normalise “home” and let it be their safe house and place to find comfort and rest.
It’s an unpredictable place to be for all of us and each day there’s a lot to adjust to.
We look forward with so much anticipation to sharing with you the next stage of our lives here as we begin working with the children at ZOE.
Roll on the next week and let the fun begin!
Posted by Cross Family at 10:25 PM