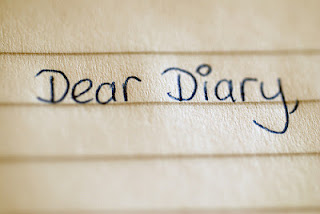 Friday September 7th: It's 9:30pm and I am waiting patiently for Dave to get home from ZOE.
My sister, Mel, and friend Andrea Stickland are flying in tonight for a week here and I'm going to pick them up from the airport at 10:40pm... yippee!

Saturday September 8th: It was so great to pick up the girls last night.  Had to laugh at the computer keyboard poking out of Andy's hand luggage.  So thankful for her bringing over another computer for ZOE. Looking forward to the week ahead.

Sunday September 9th: An early start and off to the elephant camp today.  It's Mel and Andy's first time to ride an elephant.  After hanging around waiting for their return, we learned that the elephant trainer (riding in front of them) had fallen off his elephant and then their rider had taken them off-course to spread the news! Poor man.
This was a really fun morning and relaxing afternoon. 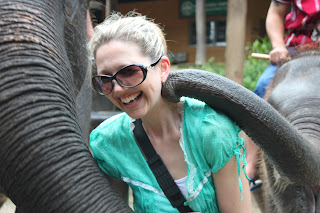 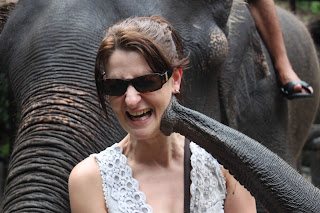 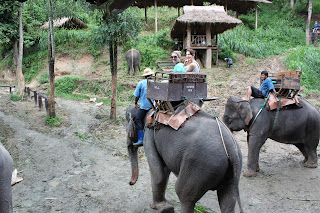 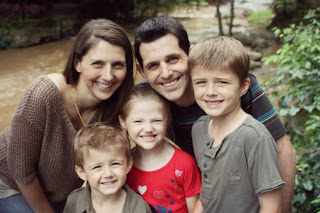 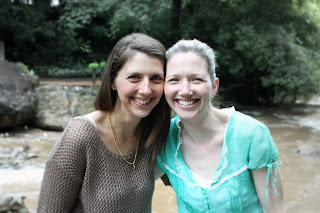 Monday September 10th: Off to work at ZOE today.  I love my job teaching English and spending more time getting to know the staff and house parents.
I had a big shock tonight (literally) as I went to make myself a coffee and got a massive electric shock from our coffee machine causing me to jump back and spill the jug of milk all over the kitchen cupboards and floor.  Felt quite achey after that and took myself off to bed rather early.

Tuesday September 11th: Going to pick up Mel and Andy after their dental appointment today but not before cruising around on the motorbike to drop the little ones at school and preschool.  We managed to fit 4 of us on the bike this morning! (after I'd taken this photo). 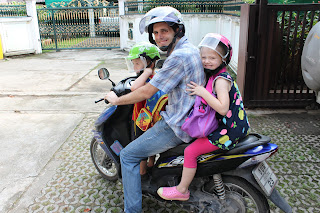 I spent a wonderful relaxing morning with Mel and Andy getting a pedicure which Andy gave me as a birthday present.  Very relaxing- thanks Andy.
Off to the barbecue restaurant tonight where you cook your own meat on a blazing hot plate in the middle of your table. 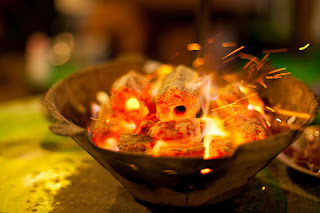 Wednesday September 12th: After watching the kids so carefully at the barbecue restaurant last night (the hot plates are very dangerous to be around) we let the 3 children have a quick play on the small playground after dinner only to have Spencer run back to the table screaming and holding his arm.  Considering the screaming had not subsided by the time we got to the car, we decided a trip to the hospital might be necessary.  After an hour or so of examinations and x-rays, it was confirmed that Spencer had fractured his elbow. 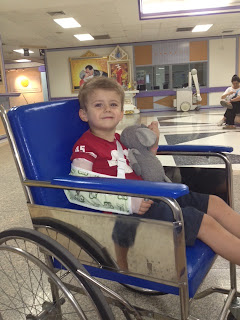 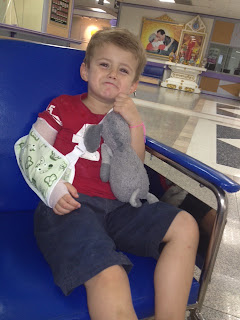 Well, I won't be going into ZOE today.  Spencer has been very subdued and is still in a fair amount of pain.  We will go back for another check up next Tuesday when the swelling has gone down and to have the full plaster cast put on.  Until then, he'll need to stay home and take it easy (hmmm that's going to be hard for him).
Spencer and I did manage a quick trip up to preschool this afternoon to say goodbye to Nong Iy his friend who is being adopted into a French family and living in Switzerland.

Thursday September 13th:  I decided that since Spencer was feeling a little more active today Mel, Andy and I would head off to the Safari park with him.  Upon arriving we were amazed to see a baby giraffe that had JUST been born!  It was still being licked down by its mother and all wobbly on its legs- so beautiful.  Unfortunately I didn't have my camera with me.

Friday September 14th: Just hanging with my little man today.  He's been a good helper as we've driven here, there and everywhere running errands today.  He is getting lots of attention and sympathy from the Thai people while we've been out, noticing his green elephant sling and sore arm. 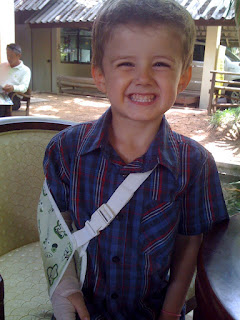 Tonight we head in to ZOE with Mel and Andrea for church.  It's their last night here.
After church, we drive them back to their hotel stopping to get them one last banana roti!

Saturday September 15th:  Parting is never fun but we all held it together whilst waving off two very special people and feeling thankful for the time they had with us.
Off home for a nanny nap as we're back out at ZOE tonight for a yummy barbecue dinner.

Sunday September 16th: It's so amazing to think that it was seven years ago that our precious son Tobiah was born.  It was a bit of a stressful birth- ending in an emergency caesar but we thank God for his safe arrival and every day that we have him in our lives. 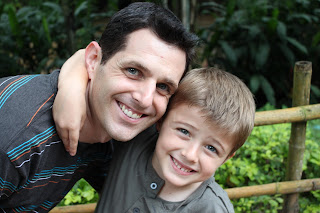 *Please pray with us for Spencer's arm to heal properly.  The doctor  will x-ray the elbow on Tuesday night and let us know whether it is healing correctly or whether a pin needs to be surgically inserted (we are believing this won't be necessary).  It's been very difficult to keep him from jumping and running around in his usual manner!!
Posted by Cross Family at 12:40 PM

Wow..seems like I'm not the only on who breaks their arm in Thailand! I broke my arm there in January while I was there with the Rockford team, on our last day..got back to the states, and had to have surgery in Feb 6th..so..I'm off of work until the end of April! I hope your little guys arm healed without problems! I sure mss ZOE!
Tammy Bauer