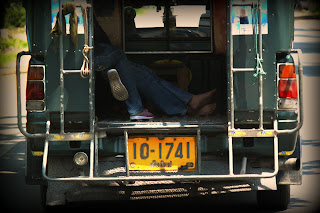 Back in 2007, I officially became a "blogger" over at my lovingmums site.  Obviously at that time, I never imagined that years later I would actually be using this zoeaustralia blog as my main mode of communication to keep in touch with our family and friends back in Australia from here- all the way away in Northern Thailand!


Then in 2009 when a few people began reading my lovingmums blog, I won a little "bloggy" award where one of the conditions of the award was to list seven things about yourself.  I recently stumbled across this old post and I had a little laugh.   BUT it did give me the idea to share again: 7 things that you may not know about me... or maybe you did!  Let me know if you knew them all!!

1. I have been a Christian since I was a child.  My faith challenges me daily to fight against my own selfishness and try to put God above all else.  I benefit so much from the peace, joy and strength that I draw from God and I'm trying harder as the years go on not to get so worried or uptight that people will start asking me deep theological questions that I won't be able to answer. I wish I had answers to all the hard questions. I wish my incredibly small human mind could make sense of the indescribable creator of the universe and that it didn't stretch my faith SO much. But that's not what "faith" is I guess! It's 'the substance of things hoped for, the evidence of things unseen'.

2. My first ever job at the tender age of 14 and 9 months was as a salad bar girl at Sizzler. I then went on to have all sorts of jobs including my "claim to fame" -being an extra on shows such as Neighbours and Blue Heelers and my biggest role, being attacked in an episode of Australia's Most Wanted! LOL!

3. Prior to having children my husband and I both decided to get braces on our teeth as adults. It was one of the most embarrassing stages of my life (teaching Grade 6 at the time and 80% of the class also had braces!) BUT one of the best decisions that I ever made. I'm really glad I did it.

4. I have had three c-sections. The first one was an emergency and the other two were planned. I felt a bit let down initially after having an emergency caesarian like I'd failed in the whole 'giving birth' department but then I realised just how blessed I was to have a healthy, thriving baby and I decided not to beat myself up about it any more.

5. We don't have a television!  We have a very small and very old portable dvd player that functions well for our children, but its size alone doesn't encourage a lot of comfortable viewing!  I turned the television off a number of years ago now and I've never looked back. I don't even know what I'm missing anymore!! Weird I know.


6. I have been working through a fear (distressing emotion aroused by impending danger, pain, etc. whether the threat is real or imagined) of dogs since about Grade 3 when a class mate of mine was attacked.  Nothing has ever happened to me personally so there's no logical reason for this emotion but I'm just saying!

7. I haven’t kept a diary/calendar this whole year.  This is shocking and most unlike me.  I don’t know what is going on with me right now- literally.   Previously I would have thought it impossible to actually survive until April not using one but, there you have it, I have.

Hah! The last one! Would you believe I keep a diary and turned up at school today only to be asked if was ready to take a couple of classes. I said "Nah ... that's next week!"
Then I looked in my diary - had to eat humble pie and apologize umpteen times. LOL!

Thanks Andie for sharing so honestly.
Luv Dad. (Chaplain's e-Corner)

Oh no Dad. Did you still teach the classes? I'm sure you pulled it off! Thanks for stopping by x

Hahaha... Christine not exactly a film career but I did get to dress up as a lot of different characters. Thanks for your comments x x