I Can Wash These Clothes! 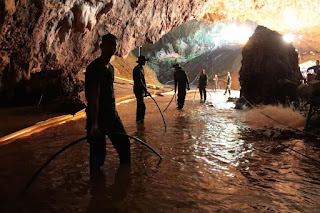 As my family and I left Thailand to travel to Australia this past July, I realised that it was not just people in Thailand but all over the world, who sat clinging to news reports updating the progress of rescuing 12 young boys who were lost and stuck in a flooded cave in Chiang Rai.

Even in Australia, the story was being followed on every radio and television channel and it felt like, across the globe, thoughts and prayers were focused on bringing those boys out to safety.

During the cave rescue mission, sadness and shock set in whenthe news came that Petty Officer Saman Gunan, former Thai navy diver, lost consciousness on his way out of the Tham Luang cave and died. He will be forever remembered and honored for his heroic efforts in the rescue mission.

There were many other heroes too, who the world may not remember or even know their names but who, behind the scenes, did their “one thing” to help.

Rawinmart Luelert is a name you might not recognize. I stumbled upon her story quite by chance. Rawinmart has a factory with 14 washing machines and 15 dryers, and a business, which provides laundry services for hotels in her area. When her friend showed her photos of the rescue workers wearing dirty uniforms, she knew there was a way that she could help. Collecting the uniforms of rescue workers every night at 9pm, she gathered a team and worked for 10 straight days, returning the uniforms at 4am after cleaning them at her laundry.

She shared her appreciation for her employees, volunteers, and friends who helped her work through the night to get the job done. One man, Suwan Kankeaw, who helped to wash the uniforms of the US Navy divers said,

“I don’t have the ability to
get the kids out directly,
but what I can do is
wash these clothes.”

As I read about Rawinmart and Suwan’s stories along with other volunteers who for 12 days prepared 400 boxes of food for lunch and dinner each day… Or who provided foot massages or haircuts for the rescue team… the stories of these people stuck in my mind.

Recently at ZOE, the Next Gen team, who lead our children and youth, carefully planned their camp theme along the lines of “Out of the Darkness”. It paralleled the events surrounding the flooded cave rescue with the message of God’s love and His plan to bring us into His marvelous light.

There were some powerful testimonies of children who chose to follow Jesus for the first time and others who recommitted to live out their faith boldly. 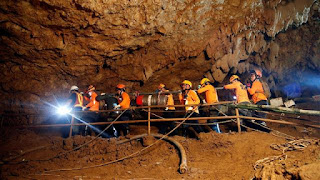 At ZOE, not all of us directly rescue children from slavery. There are so many people working in many different teams with a range of tasks, but each of us has an area that we use our skills in to support the work of rescue and make a difference.

Just like Suwan, who knew he wasn’t the one to get the boys out directly, we can take encouragement from him and so many of the other lesser-known heroes, by discovering what we CAN do – and then making a difference!

Thanks for sharing such an informative work. Meanwhile, here’s also the laundry service you can visit too our website https://www.cottoncare.com.sg offering services in affordable prices. thankyou!