As each anniversary of us living here approaches, I like to commemorate it in some way, a reflection... going back through old photos... "then and now" comparisons etc.  This year as our family celebrates our 6th anniversary in Thailand, I want to not only remember how it all began but I'm going to share a bit about our smallest family member... 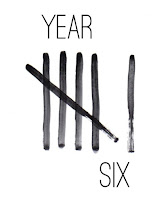 In the beginning...
On the 12th March 2009, I sent an email to a volunteer working overseas.  I had stumbled upon her family's blog shortly after hearing about a place called ZOE Children's Home. That email led to a series of other emails back and forth, then us contacting their U.S office and eventually beginning the lengthy process of applying to work in Thailand... at a children's home... we had never even been to!  Through a series of Skype interviews, conversations and a week-long trip to see the work being done in Thailand first-hand; we were accepted in July 2009 and we committed to begin preparing for the move that would totally change our lives... 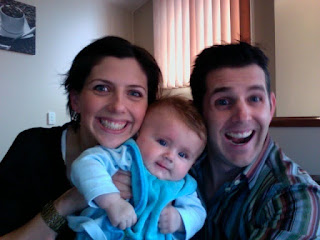 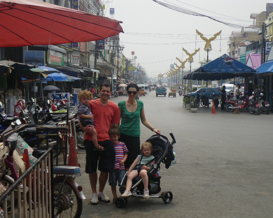 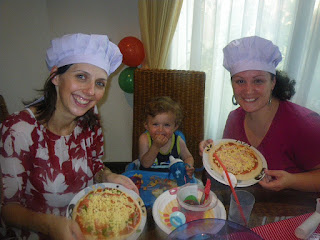 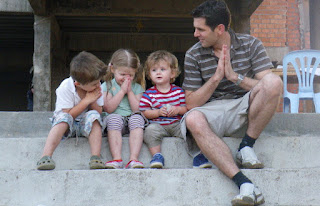 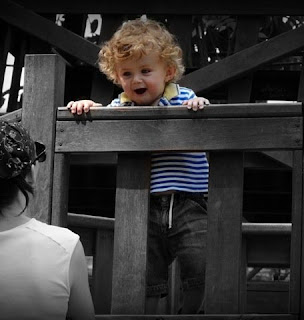 Our little guy in February 2010 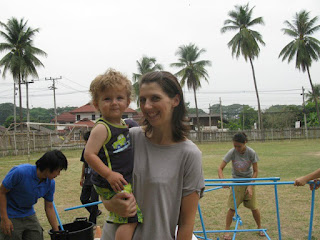 Six years down the track, Dave and I can now say that Thailand mostly feels like home.  For our children, who have lived well-over half their lives here (and for Spencer, most of his life) it is definitely home to them.

Many times, people say to me, "Oh it's so great that your kids are experiencing this. My kids are so ungrateful", or "Your children must really understand what it's like to go without" etc.
Our children are children. They struggle with self-centredness, ungratefulness and not being content just as much as ... well, all of us do.

Like other parents I know, I hope for life-changing moments for my children that rock their world, that challenge their feelings and inspire them to have a passion that, combined with a love for God, changes lives around them and in turn becomes part of their legacy.

In early 2009, as David and I sat on our new leather couch, upon freshly laid floating floor boards, a simple DVD was the tool that God used to break our hearts for something that breaks His; child trafficking.  It is moments like this, that we never forget, that change our life and demand that we do something about the wrong that we have become aware of and help to make it right.  With tear stained faces we looked at each other and said, "We have to go..." 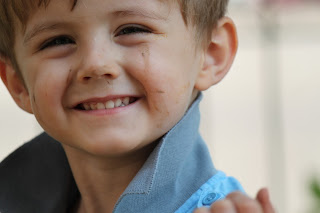 This little guy, our youngest one who is all-boy, frequently mud covered, rough, boisterous, loveable, competitive, funny, loud, outspoken and gets away with way too much - strangely also has a very tender and soft side. A dim glow under the dirt-smeared skin, a very gentle and sensitive heart beneath the wrestles, pokes and pranks.

This kid, who had just celebrated turning one a couple of months before we left Australia and had not long been walking, really could be part-Thai.
From fish eyes, frog legs and pigs blood, I'm not sure whether it's just the taste that he likes or the reaction that he gets from eating them.  He loves an audience, crazy dance moves, drumming and singing and it's no surprise that his chosen career-path (for now) is to be a racing car driver or a DJ. 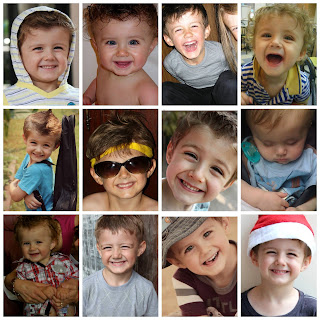 Last Sunday night...  we had planned to visit a local market and try out a newish food section where I had eaten with my parents on their recent trip.  We were all craving some western food but unexpectedly when we walked there, we found a sign saying that it is closed on Sundays.  The problem was, that we still had the hankering for some pizza or a burger so we decided to keep walking and see what we could find.  Eventually we came to a restaurant that we had been to before and ordered our food.  With much anticipation we waited and eventually we were served. It did not disappoint! We all enjoyed the treat and decided to keep the remaining pizza slices for the next day's lunch as the kids would be at home due to school holidays.

By the time we left, it was dark and the footpaths were uneven so we carefully walked single file and held each other tightly as we crossed the busy city roads.
It was just as we were about to walk into our street that we saw him... a man with his t-shirt wrapped over his head and covering his face.  He was curled up on the step sleeping with no home... and no bed.
It became quickly apparent that our children had also noticed the man as they began to wipe tears from their eyes but most surprisingly was just how confronted they felt and within seconds, wailing  sprung forth from our youngest... big, gushing tears mixed with, "... that's just so sad".

Without hesitation, we all knew that we had something in our hands... something we could give.  The treat we had earlier thought of saving for ourselves was carefully placed beside the sleeping man and as prayers were tearfully uttered, we walked on.

As we rounded the next corner, into our street, we saw yet another man, sleeping in a similar position and rugged up with clothes covering his head.

I held his hand. Both taken aback by his reaction and yet realising that it made plain sense - that this must be the first time he has remembered seeing someone like this, or was old enough to understand.

"It is sad" I agreed.  I held his hand tight.  The road was dark and quiet besides the crying.

But what was it that I really wanted him to know right now? I struggled for the words.
That's when my dad's encouragement, spoken out to each of our children on his last day in Thailand came flooding back. He was so right how he had summed each of them up.

"That soft and gentle heart you have, God gave you that heart. Remember how Gramps noticed the way that you knew all your teddy's names and the way you care for them. And the way you tenderly take care of animals? That sadness that you feel when something is not right... God must feel like that too. But He is going to use that softness in you so that you can help people.  Don't ever forget what you saw tonight.  When it makes you feel sad, you can use that to go and make a difference".

The crying continued into the night and as I lay down next to him and patted him to sleep staring down at his little tear streaked face, I remembered back to that night on the couch all those years ago when I too had wept for those who do not have a home and a family and know what it really means to be loved.

Why did I choose to share this little story?
For us parents - let's continue to pray that our children have life-altering moments that begin to shape them and inspire them to be all that they were created to be.
And in our own lives, let's continue to open up our eyes to see need around us and never forget those who have less than us or that don't know where hope, love and peace really come from.
I'm thankful, that this situation has already allowed us to, not only, have many more conversations but to also act upon the needs that we saw that night.

As our family heads into this new year, both 2016 and our seventh year here, may it be a year where we allow God to continue to use our feelings of sadness, anger and injustice in combination with His love for people to keep making a difference and really see change in our community. 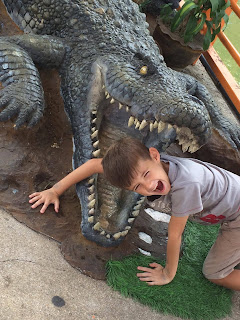 Your family is such a blessing. I love being a part of your lives here in Thailand. Thanks for sharing!! What a neat story!!

Thanks Dad!! Your words were so true and it was good to be reminded. x

Thanks Rachael! We love having you around!!!

the kingdom has total location 513,one hundred twenty km 2, barely smaller than France, however big enough for thick inexperienced forests and crystal blue seas and the whole lot in between. The terrain is typically mountainous, in particular to the north of the us of a with the best point the Doi Inthanon at an altitude of 2,576 m. To the centre, the land is mostly flat and occasional, the Chao Phraya River Valley, however basic roughly numerous regional topography capabilities https://catmotors.net/routes/doi-inthanon/