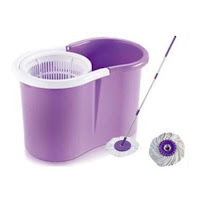 I had been telling my sister for a while now how excited I was with my new “magic mop”. I know right! Probably not many other people get excited about their mops, but anyway.
So I had mentioned that I would try to make her a video showing her my new mop but I never did…
Until today, when I realised with glee that I had a whole day at home by myself to get some much needed housework done… whoop whoop!!
Okay maybe other people don’t get excited about that either!! But I do, ha ha.

So after I had swept through the house, I got my mop and bucket and set to work making her the video showing how the magic mop works (I later found out that a simple ‘Google’ search brings up so many more professional videos than the one I made… of course it does!! Oh well.)

It’s been funny, because just this past week, I had been commenting to Dave about how our kitchen floor has lost it shine. It’s weird, even after mopping and mopping it, once it dried; it was so “cloudy” looking.
Clean but not shiny!  Sad really!
With that in mind, I decided that my first task today would be to get that kitchen floor back to a dazzling shine!!!

After mopping it a few times using the normal floor wash, it still looked cloudy so then I knew it was time to try some other remedies. I tried dish soap, vinegar and bicarb first, when that didn’t work I used dish soap and vinegar…  and then I went to just vinegar and warm water.  It was clean and slightly less cloudy after all the mopping but still no-where near what it usually looks like. I was baffled.

Then all of a sudden I remembered the end of the conversation that Dave and I had, where he said … “maybe it needs a new mop head”.
Surely not. I mean I know this house was filthy when we moved in here but we haven’t had the mop that long.

Well, off I went to search through my cleaning supplies and sure enough, there was the spare mop head.  I figured out how to take the old one off and that’s when I saw the difference… what? Crazy!! Ewww!! 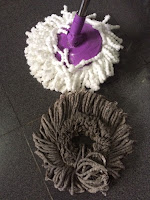 With the new head installed, I set to work with new enthusiasm and optimism and, sure enough, the floors began to, once again, shine! Just like that!

As I was gladly mopping away, music playing and happy thoughts now running through my mind, I had one of those “uh ha” moments about my mop and how our family’s life has kind-of been a bit like this too. 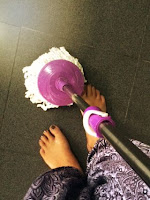 Have you ever had those times in your life when everything seems to be going okay? The kids seem settled, your marriage is strong, work is enjoyable, everything is sort of “going to plan” so to speak when suddenly or even not so suddenly… maybe subtly, you stop and wonder, what happened?  Why aren’t my kids thriving? Why are we arguing about these issues? Am I really where I am meant to be?

Sometimes we can get so used to doing things “the good old way”, “the safe way” or just the “same way” we always have.

When, just like me with the floor mop, you have a moment when it suddenly dawns on you that “umm… actually that’s just not working anymore”.

And then you ask yourself, “Why doesn’t it look nice and shiny anymore?”  You know you’re still cleaning it the same way you’ve always done.  You’re using the same cleaning products that have never let you down before… but it has recently lost its shine and you just don’t know why.

Often times we can go round and round questioning, what’s wrong with the floor, why isn’t it shiny? Why? Why? Why? All the while mopping it again and again in the same way hoping that things will improve until you suddenly look at the situation in a new way, seeing that what is required is actually something totally different.

We’re in the process of replacing a few mop heads in “life” right now. There’s a bit of adjustment going on but thankfully already the floor is starting to look a little bit shinier!  Where situations were getting a little bit too cloudy, the brightness is returning.

Maybe it’s just me and my “magical mop” analogy but I am so glad that there is always someone in my life to guide me and whisper softly to me when my mops getting dirty, “It’s time to change”. 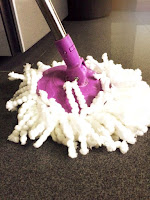