When It's Time to Fight

We recently attended an Anzac Day dawn service.  As our pastor spoke (an ex-soldier) he shared a story about how a mate of his, a few years older than him, had been sent off to the Vietnam war.
Still too young to go himself, he reflected on the moment when his friend threw himself over a land mine to protect his mates.  A sacrifice made and an example of the "Anzac spirit" which has been shown so many times since that First World War so many years ago.

He explained that although war is never wanted, there are times where we all need someone to rise up and protect us... to defend and stand up for what's right.
There are times when a fight is needed to bring peace and justice.
I personally don't really like thinking about war.  I don't even like hearing my children argue! I can't imagine what it is like for a mother, wife or sibling who loses their loved one at war.
To a non-confrontational person like me, I'd rather just pretend that issues aren't there and hope that they go away by themselves.

But what about when something unjust happens?
What about when I know that children as young as my own are being sold as slaves?
When kids are forced to work or sell their bodies or beg for money?
What then?
What about if something happens to one of my own children?
When these things happen, then… then… there is a battle!
Then, it's time to fight.
A fight for what's right!
Recently there's been times when the battles have been raging around me.  Really close.
During these times... when it's time to fight, there's some weapons I've found handy to have close by. 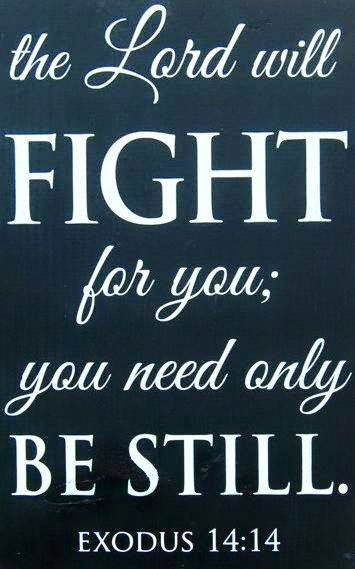 Here's a few of the "battle songs" playing on my i-pod right now.
If you have any other suggestions, I'd love to hear them.
If it's time for you to fight for a relationship, a child, a resolution, a  financial breakthrough or any other issue you're facing right now then get your weapons out and stand your ground.

Open Up Our Eyes
"Stronger is the one who fights for us.  He will never fail."
"Our God is fighting for us always.  We are not alone."

Whom Shall I Fear?
"I know who goes before me.  I know who stands behind.  The God of Angel Armies is always by my side."

In Jesus' Name
"God is fighting for us, God is on our side"

Victor's Crown
"You are always fighting for us.  Heaven's angles all around."
"You're my help and my defender. You're my Saviour and my friend."

Psalm 62:5-8
Yes, my soul, find rest in God;
my hope comes from him.
Truly he is my rock and my salvation;
he is my fortress, I will not be shaken.
My salvation and my honor depend on God;
he is my mighty rock, my refuge.
Trust in him at all times, you people;
pour out your hearts to him,
for God is our refuge.