Songkran! Soaking up the Celebrations!

Have you ever been in a water fight?  Yes?  A REALLY big one… involving all your family and friends?  What about your family, friends, neighbors and all their friends?  What about one with the WHOLE suburb?  What about, a water fight that the entire state participated in?  Or what about the WHOLE country?
Well while you stop and think about that for a moment, I’ll try to describe to you what we are experiencing here in Thailand at the moment, known as SONGKRAN!

It’s hard to articulate just what Songkran (traditional Thai New Year’s celebration) is but if you can picture the biggest water fight you’ve ever seen and times that by millions of  people (that’s just in Chiang Mai) you may start to get the idea.
So the official dates of Songkran are April 13-15th but the water throwing started as early as mid last week (Apparently the ‘unofficial’ celebrations start earlier each year LOL).  It’s all in good spirits though and you never know where the next bucket, hose, scoop or water pistol soaking will be coming from next.  You could be driving down the street, walking out of a shop or just winding the window of your car down to try to get a mosquito out and then “splash” you get hit!
You may have seen some of the photos I posted on my Facebook page depicting a little of what it is like here at the moment… it’s a little crazy and a lot of fun! 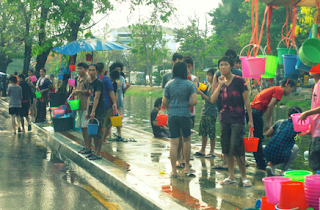 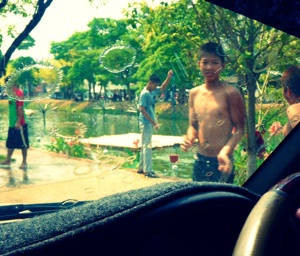 I took our three children in to ZOE today to watch the water sports that Dave had organized.  He’d come home on Monday and explained how they had ‘gone off’, so we wanted to go and see for ourselves.
Tobi, Eli, Spencer and I all watched on in glee as the ZOE children, staff and camp leaders all completed their games and got absolutely drenched in the process.  I’m not quite sure how we managed to stay as dry as we did, but it was certainly a site to see. 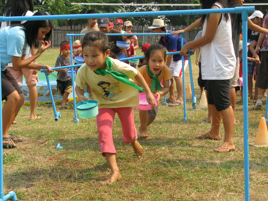 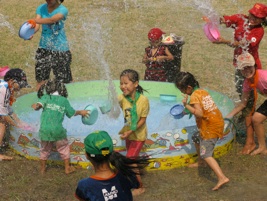 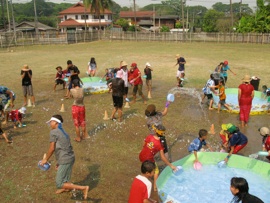 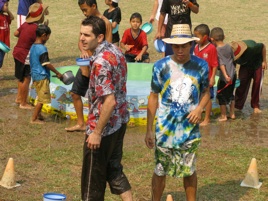 After the games finished and everyone had dried off, we enjoyed some morning tea before staying for one of the elective classes.  The elective we stayed for was rocket launchers!  Sound familiar?  Tobi’s teacher, Mr Todd, ran it.  Mr Todd had volunteered to come and help teach a class at ZOE during the Songkran school break so we suggested to him doing the rocker launcher activity that he’d done with Tobi’s class last term.
Well it was a hit.  Yesterday the older children and teenagers made and decorated their rockets, and today they launched them.  We literally had a “blast” watching them take off and seeing where they landed in the playing field out the front of the children’s home.  Each rocket launched was accompanied by many, “Oooos and ahhhhhhs” from the spectators.
From their electives, the children and teenagers then went on to “huddle” in the meeting room before lunch.  Tobi and Eli saw that the kids were all getting their passports reissued with their next boarding pass for the night session and just had to be the same.  Thankfully Dave had some spare Thai passports in his office to appease them and Garrett (son of Lynne and Les) helped to fill them out with their favorite colors, birth date etc.  I even over heard Garrett asking what Tobi wanted written on one of the blank pages to which he replied, “I love Eli”… how cute! 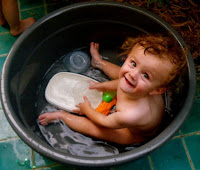 Not being able to resist all the buckets and tubs for sale during Songkran, I purchased a good-sized plastic tub for Spencer.  Sitting it just outside the kitchen door, I was able to cook dinner tonight while Spencer had a wonderful time splashing in the cold water alongside Eli dipping in her washcloth and detergent and busily playing at, and cleaning, her little kitchen.
I have loved the happy noises of the children settling in to their imaginary play these holidays.  I laugh to myself as I overhear Tobi and Eliana playing shops and asking each other the price of things and answering in baht… or yesterday Tobi loudly announced to Eli to “Hurry up” as her tuk tuk had arrived to pick her up.
As busy as it is ... and as messy as it is, with the three of them all home for longer periods, the children and I have certainly had some good times during this break.
Dave is doing a lot of hours, however it’s been a privilege to have him come home for a couple of hours in the middle of the day this week while camp’s on as he then goes back to ZOE in the afternoon and stays until about 9pm.  Due to his different ‘work’ hours this week, we have been able to drive around the city moat and experience some of what this Songkran holiday is all about… which is?  Getting VERY wet!!!!
Andie :)